1. In what ways has Jeff Immelt redirected the strategy of GE?
2. To what extent is the strategy aligned with
a. The requirements of the 21st century business environment?
b. GE’s resources & capabilities?
3. What organisational changes has the new strategy necessitated? Will GE         be able to successfully execute the new strategy?
4. What alternative strategies should GE consider? 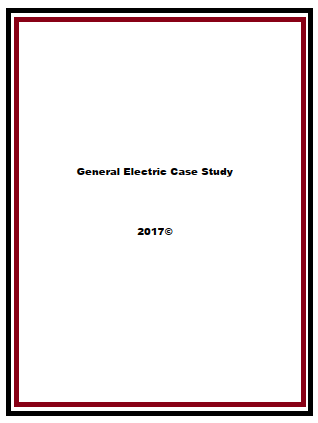 The term “strategy” comes from the Greek word “Strategos” which means “generalship” (Nickols 2016). Strategy is a common term or concept in the business field today, having been borrowed from the military. The term has been defined in different ways by scholars and experts. Johnson and Scholes (2011) define the concept as the long-term direction that a firm assumes. On the other hand, Chandler (1963) defines it as the determination of long-term objectives and goals of an organisation and relates it to the actions and allocation of resources needed for the achievement of the organisation’s goals and objectives. On his part, Steiner (2008) associates strategy with the actions that one takes to counter the predicted or actual moves of an opponent. According to Mintzber (1994), strategy is commonly applied in four different ways; as a position, as a pattern, as a plan, and finally as a perspective. Business organisations develop and apply different strategies to achieve their objectives and goals, respond to changes in the business environment, and to counter the moves taken by their competitors. This paper will focus on the strategy of General Electric (GE) under the direction of Jeff Immelt. The paper will begin by providing a background to General electric and its strategy under the leadership of Jeff Immelt before discussing the how the company’s Strategy was aligned with the 21st century business environment. The paper will then discuss GE’s strategy alignment with the company’s resources and capabilities and organisational changes in the company concluding with a brief discussion of alternative strategies that General Electric could have adopted. Continue reading: 30-64.