Should human capital be included in financial statements?

The global economy has over time shifted from an industrial economy to an economy that is based on information and knowledge (Monday, 2017). As a result, human capital has more than ever before become of greater benefit to organisations. Many human resource and business experts agree that the human capital is an organisation’s most important asset (Dean, et al. 2012 ; Cobb and Wallace, 2016). Although this is the case, employees are often considered to be liabilities in financial statements given that they are paid wages and add to business expenses such is the case with their pension contributions. People play an important role in creating intangible such as research and development, brands, patents and intellectual property. In turn, these intangible assets greatly contribute to the creation of tangible assets such as land, equipment, vehicles and plants. Human capital, therefore, emerges as a core contributor to company profits and shareholder value (Dean et al. 2012). While this is the case, human capital often does not feature in balance sheets as assets in spite of its direct and indirect contribution to business profitability and shareholder value. 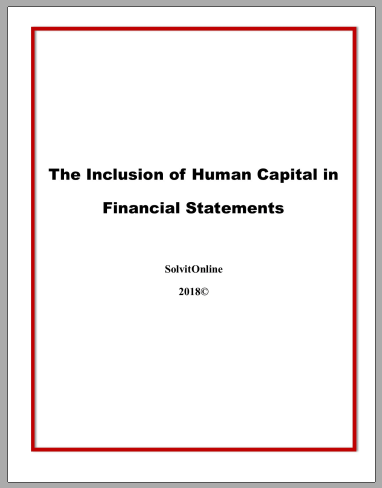 Human capital is the skills, training, education, competencies, experiences, and innovation of a person that enables the transformation of raw materials into more valuable products (Micah et al., 2012; Dean et al. 2012; Oseni and Igbinosa, 2015). Cobb and Wallace (2016) define human capital as the productive capacity of an individual including their talent, innate ability, skills, and learned knowledge among other attributes. Essentially, the human capital of an individual determines their ability to generate ideas and produce goods and services, as well as their economic productivity (Cobb and Wallace, 2016). An organisation’s human capital can be said to be sum of the current and future economic valuation of the capabilities and skills embodied within all the persons that together make the organisation’s entire work workforce at a given date (Cobb and Wallace, 2016). In essence, human capital contributes to a business’ market value as it contributes to intellectual value. Intellectual value on its part contributes to organisational reputation and brand value.

Human capital is not often recorded as an asset in financial statements for a number of reasons. One reason for this is that human capital is difficult to quantify. As noted by Washer and Nippani (2004), the value of human capital is affected by numerous factors including age, mortality rate, worker’s health, household consumption, and job security among other factors, which makes it very difficult to quantify. Also, since companies do not really own their employees, there is always the possibility that manpower will change in the course of the organisation’s operation. When employees leave the organisation or are replaced, there is the challenge of determining the human capital replacement cost (Monday 2017). At the same time, the quantification of human capital, just like the quantification of stock, is greatly subjective. In this regard, two competent financial analysts, each applying a well justified approach, could compute the values for an individual’s human capital and come with significantly different results. As noted by Dean et al. (2012), given that quantifying human capital is very subjective, including it in financial statements can lead to incomparability and opportunities to sharply increase an organisation’s assets.

Several models including the cost, market and income-based approaches have been developed in an attempt to quantify the value of human capital. Each of these approaches has its share of limitations making it difficult to create a uniform accounting standard for measuring, recognising and reporting human capital. Scarbrough (2003), for example, notes that the cost based approaches do not recognise the importance of the value creation
effect which, in the first place, is the major reason for seeking greater information on human capital. Appreciating the nature of human capital and the challenges experienced in its valuation, Petkov (2009) concludes that human capital is dynamic and demands multiple indicators for its valuation.

The Changing Value of Human Capital

Cobb, G. and Wallace, K. (2016). Valuable People – What is human capital and how do you quantify it? A practical approach from the utility industry. Available at: https://www.icaew.com/-/media/corporate/files/technical/sustainability/rethinkingcapitals/tecplm15059-1-george-cobb-and-kate-wallace.ashx

Oseni, A. and Igbinosa, P. (2015). Accounting for Human Capital: Is the Statement of Financial Position Missing Something? Journal of Educational Policy and Entrepreneurial Research (JEPER) 2(5): 108-114.