Did Decolonisation Transform Power Relations in the International Economy? If not, why not?

Decolonisation has been defined by Tuhiwai (2010, p. 3) as “the long-term process involving the bureaucratic, cultural, linguistic, and psychological divesting of colonial power”. According to Klose (2014), decolonisation is a process that involves the dissolution of colonial rule together with its economic, political, social, and cultural dimensions. Although different scholars have defined decolonization in different ways, there is wide agreement that decolonization is linked to the transfer of legal and institutional control over territories and dependencies from colonial powers to indigenously based, formally sovereign, nation states (Duara, 2004). Decolonisation, in Duara’s (2004) view, was not only a process but also a movement for political solidarity and moral justice against imperialism. There is a lot of agreement among scholars that decolonization had a significant impact on the global sphere (Collins, 2016; Office of the Historian, 2018). This notion is especially supported by the fact that within thirty years of the signing of the Charter of the United Nations in 1945, the European colonial empires in Africa and Asia completely disappeared, and in their stead stood new independent states (Klose 2014). For many territories under colonial rule, the thought of becoming independent states through the process of decolonization promised hope, freedom and prosperity. Decolonisation also promised positive changes in power relations between the newly formed independent states and imperial powers. This paper seeks to answer the question: Did decolonisation transform power relations in the international economy? If not, why not?This paper argues, based on dependency, New International Economic Order, and structuralism, that in spite of these promises, decolonisation did not truly transform power relations in the international economy.

Power in International Politics and Economy

The concept of “power” is perhaps the most fundamental in political science, international relations and political theory. Although there is general consensus regarding its importance, the definition of “power” remains a subject of great disagreement and debate. Indeed according to Barnett and Duvall (2005), scholars remain divided on how to define, conceive, study, and measure power, rendering the concept quite elusive. According to Barnett and Duvall (2005), power relates to the production of effects, in and through social relations, which determine the ability of actors to define or decide their circumstances and fate. Read more … 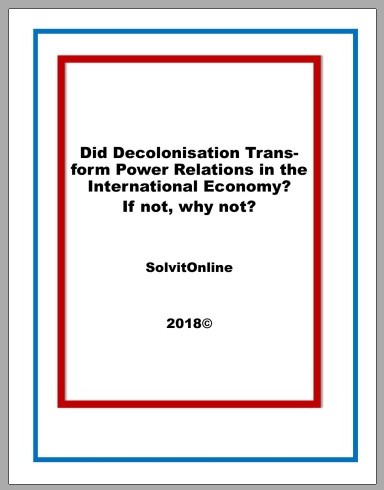