Q. Explain the ‘cycle of breathing’

Q. Define “elasticity” and explain the effects it has on the lungs when reduced.

Q. Define “compliance” and explain the effects it has on the lungs when reduced.

Q. Define “airway resistance” and explain the effects it has on the lungs when reduced.

Q. A man has been hit by a car and you have been called to attend to him. He seems to be unconscious. His breathing is fast and shallow and he has a weak radial pulse. Your inspection of the casualty reveals that the left side of his chest is not rising and falling equally. There is no sign of catastrophic haemorrhage, his circulation is compromised, and there is a snoring sound emanating from his airway. Suggest a treatment plan for the casualty that includes scene consideration and additional resources, assessment and management of the patient, and his transport to definitive care.

Q. Label the bones on the diagram: 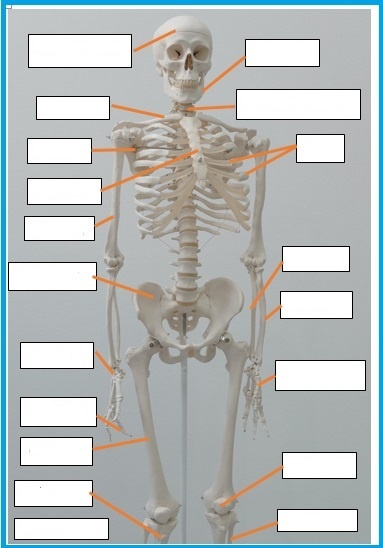 Q. What are the functions of bone?

Q. What are the functions of muscle?

Q. What are the functions of tendons?

Q. What are the functions of ligaments?

Q. What are the functions of joints?

Q. What are the two main components of the central nervous system (CNS)?

Q. What are the functions of the Central Nervous System (CNS)?

Q. What are the functions of the Peripheral Nervous System (PNS)?

Q. You have been called to attend to a female patient who seems to have been sexually assaulted. Briefly discuss the considerations needed to care for the patient. In your discussion, ensure to touch on the following issues: the assessment of time critical injuries, forensic considerations, approach towards the patient, communications with the patient, patient’s wishes with regard to contacting the police, and care pathways (Sexual Assault Referral Centre).

Q. What are the roles of the following crew members when attending to a major incident: attendant, driver, first crew on scene, and first responder on scene?

Q. What is triage (focus on treatment of patients, recording of findings, and special considerations for children)?

Q. Chemical, Biological, Radiological, Nuclear and Explosive (CBRNE) incidents can have several effects. For each of the elements of CBRNE, state the routes of entry and the possible effects that should be considered.

Q. You have been called to attend to a situation in a public area that is heavily populated. A member of the public tells you that there is a rucksack that has been left unattended for an hour or so. Provide a summary of how you will initially deal with the package and how you will act when the situation is considered a terrorist incident. State what “METHANE” stands for and provide details that you would include in your “METHANE” report.

Q. Briefly describe how you would manage a patient with traumatic chest injuries with a focus on open chest wound, pneumothorax, tension pneumothorax, haemothorax, and flail chest.